Tim Harford, “the Undercover Economist”, is a Financial Times columnist, BBC broadcaster, and the author of nine books (most recently “How To Make The World Add Up” / “The Data Detective”) and the podcast “Cautionary Tales”.

Tim is an economist, journalist and broadcaster. He is author of “How To Make the World Add Up”, “Messy”, and the million-selling “The Undercover Economist”. Tim is a senior columnist at the Financial Times, and the presenter of Radio 4’s “More or Less”, the iTunes-topping series “Fifty Things That Made the Modern Economy”, and the podcast “Cautionary Tales”. Tim has spoken at TED, PopTech and the Sydney Opera House. He is an associate member of Nuffield College, Oxford and an honorary fellow of the Royal Statistical Society. Tim was made an OBE for services to improving economic understanding in the New Year honours of 2019.

In 2018 “Fifty Things” was nominated for a Webby award while “More or Less” won “best radio news and current affairs programme” from the Voice of the Viewer and Listener.
“More or Less” has repeatedly been recognised for journalistic excellence by the Royal Statistical society, winning in 2010 and 2013, with special commendations in 2011, 2012, 2014 and 2018. Tim also presented a World Service program that won the AIB Radio Journalism award 2015.

Tim Harford is a senior columnist for the Financial Times. His long-running column, “The Undercover Economist”, reveals the economic ideas behind everyday experiences, while he also writes op-eds, interviews and long feature articles for the FT. He is an evangelist for the power of economics, wisely used, and has spoken at TED, PopTech and Sydney Opera House.

As a broadcaster, Tim has presented television and radio series for the BBC, including “More or Less”, “Pop Up Ideas“, “Trust Me, I’m an Economist” and “50 Things That Made the Modern Economy“. The Times of London recently rated both “More or Less” and “50 Things” among the world’s best 10 podcasts. His new podcast, produced by Pushkin Industries (Malcolm Gladwell, Jacob Weisberg) is “Cautionary Tales“.

Tim has appeared on the Colbert Report, Newsnight, Marketplace, Planet Money, PM, Today, The One Show and many other popular radio and TV programs. His writing has been published by the leading magazines and newspapers on both sides of the Atlantic, including Esquire, Forbes, Wired, New York Magazine, the Guardian, the Sunday Times, the Washington Post and the New York Times.

Tim was a member of the Royal Economic Society council 2011-2017. He is an honorary fellow of the Royal Statistical Society and an associate member of Nuffield College, Oxford. Tim was made an OBE for services to improving economic understanding in the New Year honours of 2019. He lives in Oxford with his wife and three children.

How to Make the World Add Up 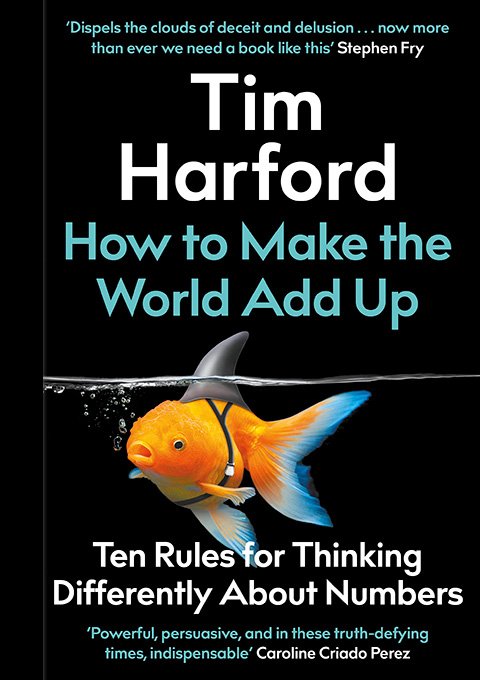 “Fabulously readable, lucid, witty and authoritative… Every politician and journalist should be made to read this book…